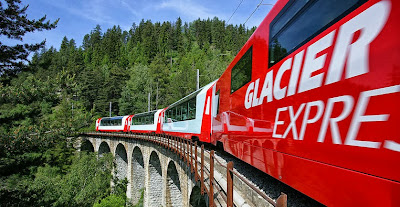 Swiss trains are known for being among the fastest, and most efficient trains in the world. While this holds true for most of them, certain lines around Switzerland are purpose built, to enjoy a slow, relaxing, and scenic journey through the country. These trains are known as the 'Scenic Routes' and the 15 or so train journeys provide breathtaking panoramic views of many beautiful parts of Switzerland, whilst also taking you to your next destination in comfort and pleasure.

One of our most popular excursions is the Glacier Express. This train will take you from St. Moritz to Zermatt (or the reverse!). A day of travel through unspoilt mountain countryside, deep gorges and lovely valleys, through 91 tunnels and over 291 magnificent bridges. You can also choose to book a quality 3 course lunch on board for the trip.

The Glacier Express train links in with the MGB (Matterhorn Gotthard Bahn). The MGB is a metre gauge railway in the Canton of Valais, Switzerland. Its 44 kilometre long line links the communities of the Goms Valley, Brig and Visp in the Rhone Valley with Täsch and the car free holiday resort of Zermatt in the Mattertal. The MGB also forms part of the much travelled and admired route of the Glacier Express between St. Moritz and Zermatt. The BVZ (Brig-Visp-Zermatt Bahn) as it was known then, was first opened in 1891, when footfall to the resort of Zermatt demanded it. In 2003 the BVZ was merged with the FO (Furka-Oberalp-Bahn) to form the Matterhorn-Gotthard-Bahn (MGB) - as it is still known today..

In the roaring 1920s, and because of adventurous reports from alpine enthusiasts, the travel-keen upper-class from all four corners of the world at long last discovered the rustic charms of the Swiss Alps; previously remote mountain villages such as Zermatt and St.Moritz were transformed into chic health resorts. The three railway companies of that period (VZ – later BVZ, RhB and FO) respectively successfully took advantage of the tourism potential at hand with the opening of the route between the Valais and Graubünden in 1926: the introduction of the through coaches Brig – Chur and Brig – St.Moritz exclusively in summer was met with a lot of interest amongst the travelling public. By the way, it was to take more than 50 years before the trains were able to also cross the impassable Furka alpine route in winter.June 25, 1930 – an historical date after the opening of the connection Visp – Brig, the Glacier Express ran for the very first time from Zermatt to St.Moritz. To cater for travellers – one travelled in elegant salon coaches – and converted passenger coaches from 1st to 3rd class – dining cars were introduced on the route between St.Moritz and Disentis.

With the turmoil of the Second World War, express traffic was withdrawn from 1943 onwards to be reintroduced with slight changes in 1948 – in particular, without an elegant salon coach but with a dining car to the Oberalp pass. The Glacier Express also benefited from technological advancement during the 1950s and 1960s: faster engines produced shorter travelling times even for the "world’s slowest fast train", and comfortable coaches as well as the reintroduction of the dining cars to Andermatt inexorably increased the attraction of the Glacier Express.

Until 1982 the Glacier Express only ran in summer because the extended Furka alpine route was not safe in winter. Construction work on the Furka tunnel between Oberwald and Realp began in 1973 and service could finally start through the tunnel on 26 June 1982: the Glacier Express now runs all year round (except for a break from late October to mid-December).

Thanks to modern technology and focused marketing efforts the Glacier Express grew into an unmistakeable top-notch Swiss tourism product in the 1980s and 1990s: there has been continual growing worldwide demand on the unique Swiss Alpine train. Not just huge investments in infrastructure contributed to this – e.g. modern coaches such as air-conditioned panorama coaches – but also exquisite services such as perfect catering services, clever special trips and a wide range of packages offered at an international level in the travel market.

Trips on the Glacier Express & all other classic rail journeys throughout Switzerland can be found on SwissPasses.com. If you're considering staying out a while in Zermatt at the end of your Glacier Express tour, we have some great apartments and hotels available this coming winter season over at OTP Winter Holidays. Hope to see you soon! :)