With it being less than eight days until one of the worlds most prestigious downhill, slalom and combined races on the skiing calendar the Jungfrau region has once again turned into a bustling hive of activity. From the 17th - 19th  of January 2014, it is expected that up to 30,000 spectators will come to watch the 84th  International Lauberhorn Races.

The Lauberhorn is a mountain situated between Wengen and Grindelwald, north of Kleine Scheidegg. Although, when compared to the mountains which surround it such as the Eiger and the Jungfrau it is very much belittled, its summit still reaches an elevation of 2,472m (8,110) above sea level.  Whilst attracting thousands of tourists during the winter months, the mountain is best known as the site of the Lauberhorn alpine ski races. The downhill course itself boasts the longest run in the world, with an enormous length of 4.455km (2.768mi). However this does not seem to prevent racers who score run times of two and a half minutes (about 30-45 seconds longer than the standard downhill races). Skiers reach speeds of up to 160km/h (100mph) on its Haneggschuss, some of the fastest speeds reached on the FIS World Cup circuit.

The Lauberhorn downhill run itself is argued to be one of the most picturesque in the world. As previously mentioned it is surrounded by the Eiger, Mönch and Jungfrau above the Lauterbrunnen valley. As the race is annually held in mid January, blue skies and perfect weather grace spectators and racers alike. Its spectacular surroundings certainly do not take away from the set up of the run itself. The most impressive being that of the Hundschopf, a signature 40m (130ft) jump over a rock nose. Seconded to that has to be the Kernen-S, where skiers pass over a bridge at approximately 80km/h (50mph) and finally racers underpass the infamous Wasserstation tunnel which acts as the viaduct for the local railroad – Wengernalpbahn.

Unfortunately, many of the sections of the course are named because of the severity of the occasionally fatal crashes and falls that occur. The Minsch-Kante is where Josef Minsch fell in 1965 and was hospitalized for weeks. The Canadian Corner is named after two of the Crazy Canucks, Dave Irwin and Ken Read, who aggressively attacked this part of the course in 1976 and subsequently fell during the race. The Kernen-S was renamed for 2003 winner Bruno Kernen after his crash in 2006 at the former Brüggli-S. The Silberhornsprung was introduced in 2003 with the pyramid-shaped Silberhorn mountain in the background for television viewers. The Österreicherloch (Austrian hole) got its name in 1954 when almost all participating Austrian skiers (including Toni Sailer) fell there; 1960s Austrian great Karl Schranz later fell there as well.
In 1991, a tragic death occurred during training for the race at the Ziel-S (Finish-S). The young Austrian skier Gernot Reinstadler was not able to finish the S-curve properly and therefore jumped into the slope boundary (because he was too far to the right), where he hooked one ski in the safety netting and suffered severe injuries to the lower body. He died shortly after the accident from internal bleeding. The race was not held that year. In reaction to this tragic event, the slope boundary at that place was also equipped with rejection canvas and the gates were moved upwards and more to the left. 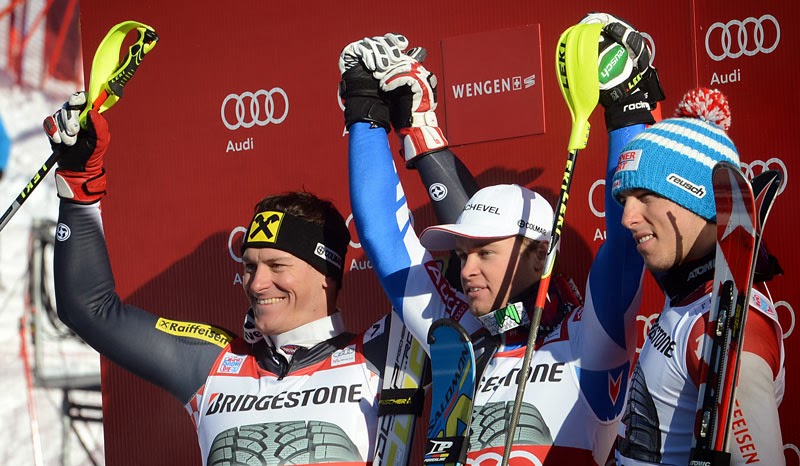 The best-known sections of the Lauberhorn downhill race are the following (in descending order)
•       Russisprung (Russi jump), named after Swiss Olympic champion Bernhard Russi, in the upper treeless part of the course
•       Hundschopf (dog's head), the Lauberhorn's signature jump over the rock nose, about a third of the way down the course
•       Minsch-Kante and the long fall-away curve
•       Canadian Corner
•       Alpweg trail, very narrow and only 3 m (10 ft) in width
•       Kernen-S (formerly the Brüggli-S), consecutive right-left 90° curves separated by a small bridge), which reduces speed considerably
•       Wasserstation (water station), a small tunnel underpassing the local railroad Wengernalpbahn
•       Langentrajen where the slope becomes significantly flatter
•       Haneggschuss, a pitch after the flats where top speeds approach 160 km/h (100 mph)
•       Silberhornsprung (Silberhorn jump)
•       Österreicherloch (Austrian hole)
Ziel-S (finish-S) which is endurance challenging and finally a finish jump (reduced in recent seasons)

The Lauberhorn downhill race has continually taken place annually since 1930 and is one of the oldest ski races in the world. As a vast spectator sport the Russisprung was originally built in the spring for a television show and was incorporated into the course by organizers the following year. Snowmaking was added to the course in the mid-1990s, and the combined race has been a run as a "super combined" since the World Cup debut of the format at Wengen in 2005. The super-combi is two runs (one shortened downhill and one slalom) run on the same day, rather than three runs (one downhill and two slalom) of the traditional combined. On the World Cup circuit, the traditional combined is usually not run as separate races, but determined "on paper" from the results of the primary downhill and slalom races, which are run on separate days. (The Olympics and world championships are the exceptions, holding entirely separate races for the combined.) At the Winter Olympics, the super-combined format replaced the traditional combined in 2010. 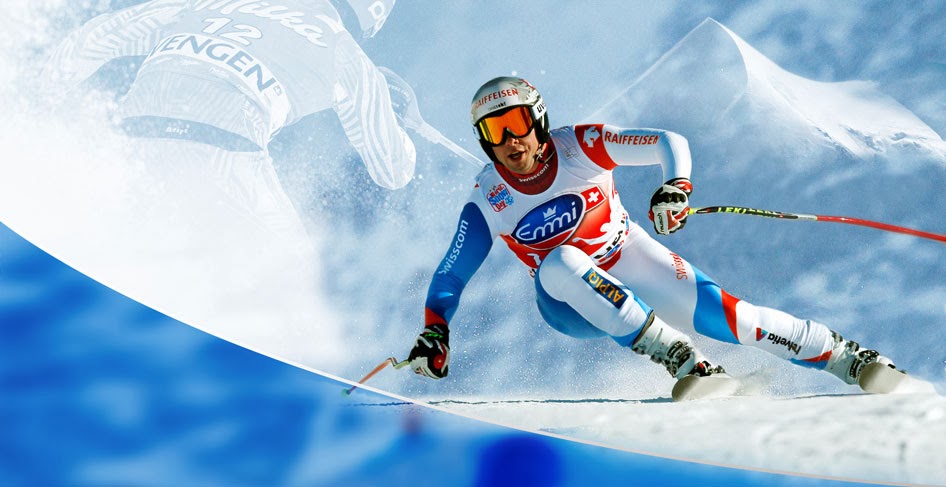 A live count down is available at http://www.lauberhorn.ch/en/home and as the international teams start to gather in the area, we at OTP Swiss Holidays look forward to welcoming those arriving.

With easy access from all Swiss airports, the Jungfrau region offer brilliant skiing and at OTP we offer holidays based in Grindelwald and Wengen (www.otp.co.uk)

If you simply want to get to see the races for a day, www.swisspasses.com provides discounted travel passes and ski passes too!